I try to write one blog post per week when I'm not traveling.  That's easy when I'm planning something to do in the future.  All of our future air travel is on hold.  Although Wisconsin private businesses have started opening, public campgrounds have not.  Unlike western states, Wisconsin's opportunities for dispersed camping are very limited.
I was really excited to learn that the Kickapoo Reserve in southwestern Wisconsin was going to open up for primitive camping without hookups. Then, shortly after Wisconsin citizens started going nuts hanging out at bars and music venues, southwestern Wisconsin had a flare-up of cases.  Kickapoo Reserve has indefinitely called off camping for the summer season.
The other ball that I need to keep in the air is Justin.  While Allie is doing most of his care, the two sometimes don't get along that well.  There are also certain less pleasant aspects of Justin's care that we typically do for Allie.  Julia and I won't be able to travel together unless we can get Allie on board for doing everything required.
So...we continue living in the moment. I take my country walks, split my wood, and have an occasional brew at the end of the day. 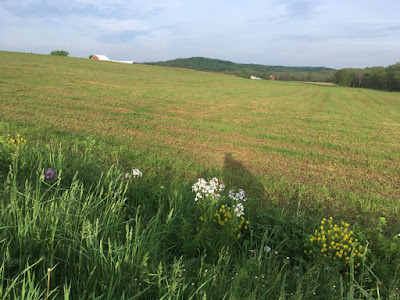 My sourdough bread efforts have produced mixed results.  The pancakes have been outstanding.  Sometimes, the bread is great.  This week, it ended up going straight into the trash.  I guess I need to keep working at it.
The highlight of the week was a trip to east-central Wisconsin where I did my first biking in over 25 years. I bought my Trek bike in 1983.  It was my first major purchase after college.  For awhile, I was a serious biker.  My friend Dave and I biked across the state of Wisconsin in 1988. On that ride, he met his future wife Ruth.  Dave, Ruth and Julia are still active bikers.
I dragged my old Trek out of the pole shed last year and had it tuned up by a technician who was younger than the bike.  The higher-end bikes today are lighter, more expensive and supposedly better.  My Trek is steel-sturdy and managed to keep up with the newer bikes of Dave, Ruth and Julia.  We only did 16 miles, but that included some serious hills.  I still prefer hiking/walking, but I have to admit that it felt good to ride fast on the downhills.
Labels: Biking Family Lodi Wisconsin