I would not call Aruba a hiking destination. Outdoor activities focus on beaches and water sports. There are plenty of good places to walk. We are usually above 20,000 steps each day just walking along the downtown streets and the coastal walking paved paths. Finding wild places is another matter.

But there are a couple of hiking trails I can recommend.  One of the destinations is accessible by local bus (Arubabus—$5/round trip). We worked to get the photo below. Multiple ladders get you to the highest point in the historic Fort.


Our bus driver was kind to let us know where to get off and general directions, which involved about a mile walk alongside roads to the base of the small mountain. 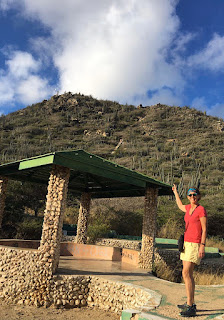 It doesn’t look like much of a mountain. In truth, the hike is short—less than twenty minutes up and even faster down, However, what it lacks in length, the hike makes up in steepness. There are about 600 steps to the top 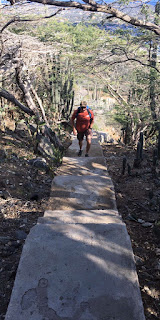 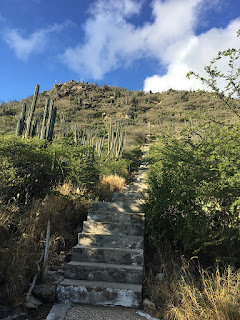 Going up is a great workout. Going down is a good test for 59 year old knees.

Mount Hooiberg was the warm-up for our seven mile hike at Arikok National Park. Unfortunately, accessing the National Park isn’t practical to do by local bus or taxi. We rented a small Toyota with a 1.1L engine for $55 for a day. It featured roll-up windows and manual locks. The drive was only about eight miles, but it took about a half hour to make the drive. The road required slowing down nearly to a stop to cross rocky drainage paths.

Admission is $11/person which goes towards conservation efforts. Most of the users of the park were using ATV’s to access the park’s features. The four wheeler trails are separate from the hiking trails, and there’s enough distance that noise wasn’t really an issue. We saw only two other hikers that day.

The trail we chose went to a natural Pool known locally as “Conchi.”  It’s about three miles each way with numerous side trail options to beaches and overlooks. There is no water available on the trail. I would recommend at least one liter. I would have drank two if available.  The conditions are hot, humid and dusty, along with lots of ups and downs on trails with loose rock.

The trail starts up along cactus and short thorny trees which one must duck to avoid. 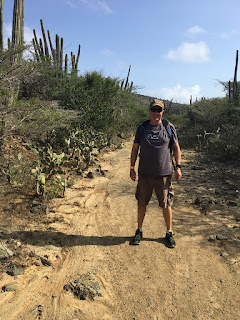 After a long climb, the trail becomes fully exposed. The cactus and trees vanish, leaving sparse vegetation at ankle height.  The trail goes up and down the hills. Finally, we reach a view above the ocean. This area is known as the Wild Coast of Aruba. 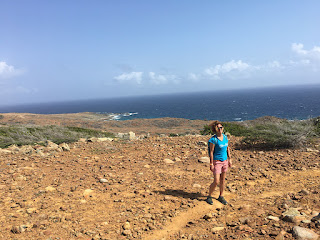 When we crest another hill, we can see a herd of goats hanging out on the rocks at the edge of the sea. 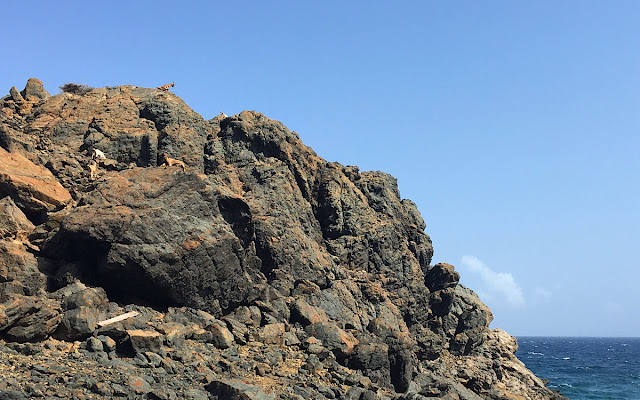 There were goats all over both sides of the rock. I liked the perch of the goat below. 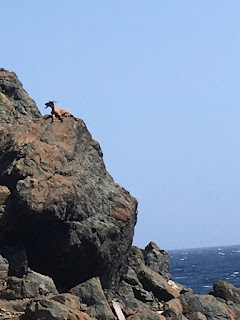 As we hiked below the goats’ hangout, a strong smell became unpleasantly stronger. Julia said it was the goat herd, but then we discovered a kind of goat graveyard with a couple of skeletons and at least one recent death. We’re not quite sure what was going on here, but we quickly left the area. This was a side hike, and we got back on the main trail.

From here, it was about another mile of ups and downs to the natural pool. When we first arrived, a bunch of atv riders were just getting out. After that, Julia had the pool to herself. Not being a strong swimmer, I enjoyed scrambling around the cliffs and cooled off with the ocean spray. 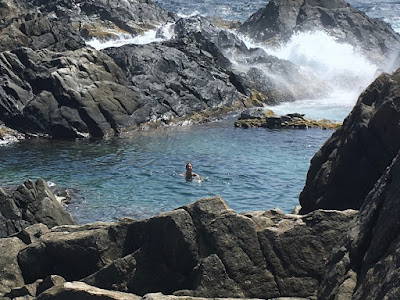 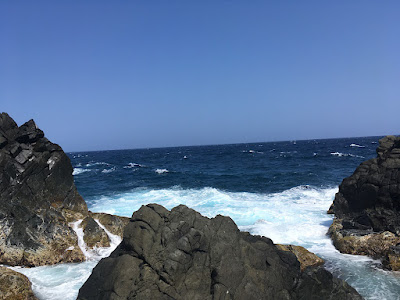 Eventually, more atv riders arrived, and we started the return hike. It seemed a lot hotter. The goats crossed our path once more. 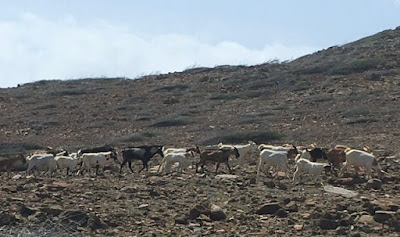 Our water lasted until about a 1/2 mile before the end. After rehydrating at the Visitors Center, we drove back to town for a celebratory sunset dinner on our last night in Orangestad. 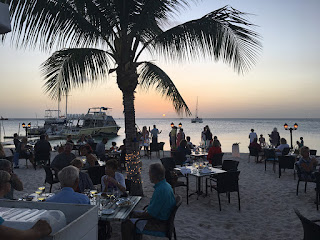 We are headed north on the island to another Airbnb near Eagle Beach. Let Julia’s sun-bathing begin in earnest. I’m sure I can find something to do.
Labels: Aruba Hiking