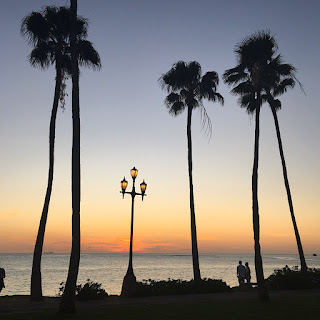 We’ve had a few days now to settle into our location in  downtown Oranjestad. As a disclaimer, Aruba is better suited for Julia than me. There are lots of beautiful beaches, and she is happy laying out in the sun all day. For me, it’s been more challenging.

Our hostess told us on the first day that the sun is very “hard” here, and we frequently joke about that descriptive. The sun is very intense, especially for a paleface like me. Each day, I put on my hat and slather up with sunscreen. I try to find shade where I can during the middle of the day. Often, that’s a beachside bar, where I’ll sip the local brews, which are about $4 for shorties (7 ounces).  Cocktails start at $10. Yes, food and beverages here are very expensive.

In fact, everything is pretty expensive here. On the plus side, people here seem to be better off than anywhere we’ve been in the Caribbean or Mexico. Generally, it’s a very clean country. We haven’t seen any military presence. Police presence is barely visible. We haven’t been approached by panhandlers or venders. You have to look hard to see any signs of poverty.

The cruise terminal, about a twenty minute walk from our room, is adjacent to the Renaissance Hotel. Both are a focal point on the downtown waterfront. Every day, a big cruise ship disgorges its people to descend on the trinket shops and luxury stores.

The people in the rooms above the casino don’t have to walk far from the Gucci or Rolex stores below to get to a water taxi that will spirit them away to Renaissance’s private island, stocked with flamingos which were imported from Venezuela. 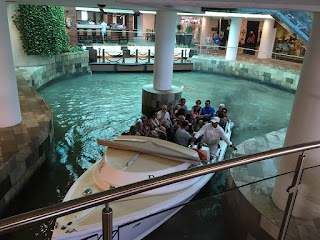 With that backdrop, we create our own realities with long walks along the beaches, local bus rides around the island, and strolls through the historical sites. 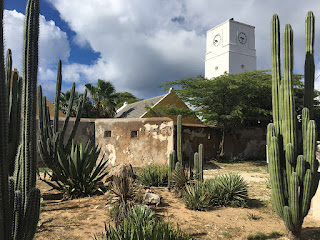 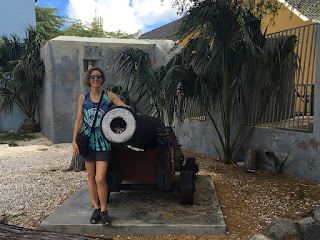 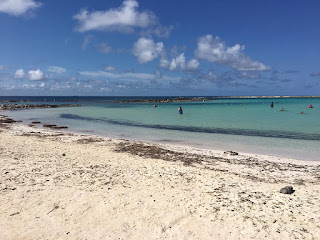 Aruba has been occupied by several European powers over the years, starting in the late 1400’s. It won a nickname as the useless island because its early exploiters found no gold or silver. It still maintains a relationship with the Kingdom of the Netherlands but won its independence during the 1980’s. These gentlemen below were instrumental in that struggle.  Today, Aruba, with tourism as its main pillar, is known as “one happy island.” 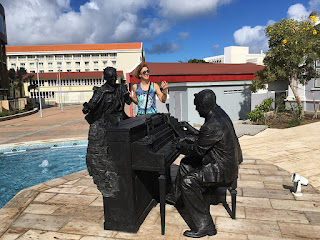 In the mornings, we”ve been making our own breakfast from Aruban eggs and plantains. In the late afternoons, we eat combined lunch/dinner, usually some kind of seafood. The grouper and shrimp are amazing. We’ve been disappointed by some of the other local fish, which has been oily and strong tasting.

My favorite time of day is sunset. Sometimes, the clouds don’t cooperate for photos, but the cooler temperatures, soft light, and gentle breezes are a great way to end the day. 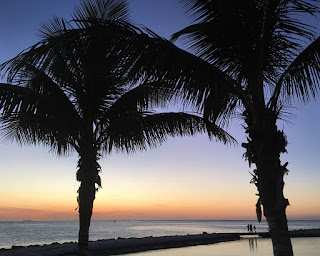