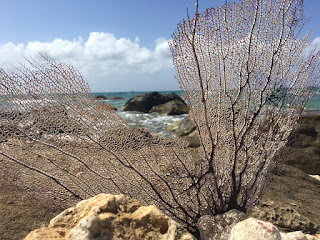 As I'm writing this post, we have returned to Wisconsin's frozen tundra. The change has been shocking.  Temperatures for us have dropped from 88F in Oranjestad to an expected -12F tonight.

During our last week in Aruba, Julia spent a lot of time sunning on the beach and snorkeling in the water.  I put in over ten miles a day walking, reading books, and relaxing in the shade.  We had some great meals at the apartment and one really good meal at an Italian restaurant in Eagle Beach.

On our last night, we were total tourists.  We went on a pirate ship booze cruise.  For $30, the two hour sunset cruise included an open bar and encouragement to jump off the ship (after signing waivers). 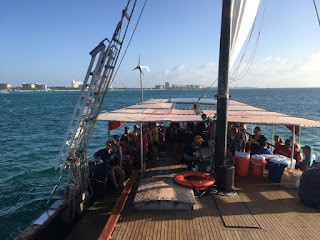 The average age on the boat was over 50, so there weren't a lot of volunteers to swing off the rope swing into the ocean.  I have previously mentioned that Julia is a strong swimmer, so she was all in. 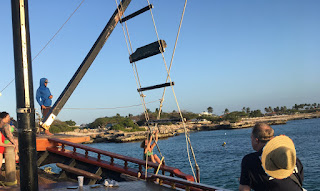 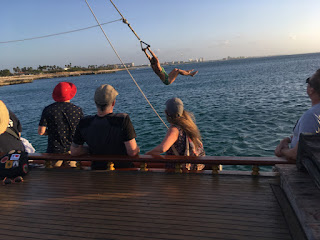 I can swim if my life depended upon it, but it didn't. I did momentarily set my cocktail aside to take photos.

The trip home was uneventful.

Aruba is a very interesting place.  On the positive side, the weather is amazingly consistent.  It rarely rains.  The temperature was always in the mid to upper 80's during the day, and cooled off only into the upper 70's at night.  It never rained for more than a few minutes.  There seems to be very little crime. In general, the island is very clean.

No mosquitoes were seen during our two weeks.  The water, which is obtained through desalination plants, is outstanding.  The dollar is freely accepted.  Almost everyone speaks English, although Spanish and Papiamento (Creole) are spoken also.

Some tourists absolutely love Aruba for these reasons.  We met people who've been coming to Aruba every year for over fifteen years.   While we liked Aruba and are glad we visited, we would probably not return for the following reasons.

It's very expensive.  Very little is grown or made on the island, so almost everything has to be imported.  Super Foods, the grocery store near our second apartment, was easily one of the top three stores I've ever been in.  They had almost everything you could imagine, and it was very high quality.  There were meats and cheeses that I've only seen in Europe.  Again, it was very expensive.

Some of the resorts and hotel properties in Eagle Beach are just amazing and priced that way too.

One of Julia's favorite properties was the RIO resort that we walked through often.  It's an all-inclusive with rates that start near $600/night.

Aruba is hot and humid.  This is a desert island, but the humidity is pretty intense, being surrounded by ocean.  During the day, I was sweating without even moving very much.  We noticed locals would get out and walk right before sunrise or right after sunset.  There isn't much exercising going on during the day.   I'm good with hot and dry, but humidity is not my thing.

Unless you are eating or drinking, there isn't a ton to do besides lay on the beach.  For some folks, that's a perfect vacation.  A week wouldn't have been enough to experience Aruba.  By the end of two weeks, we felt like we had pretty much done the island. We will always remember the sunsets. 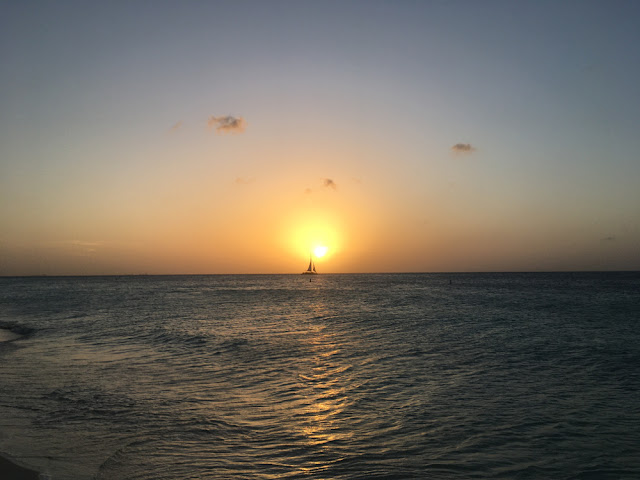