Our early winter continues.  I traded my snowshoes for my medium-duty Dahner hiking boots.  The snow wasn’t deep enough for snowshoes. The hiking boots provided extra support for the hidden rocks and stumps lurking under the snow.

Gibraltar Rock was a winter wonderland.  No prior footsteps or paw prints in the snow meant that Callie and I found the solitude that we were looking for.

We chose the Upland Trail out of the Steinke Basin parking lot.  Trail conditions alternated between icy and windy out of the sun to soggy and warm in the sun.  We didn’t see anyone else hiking all morning 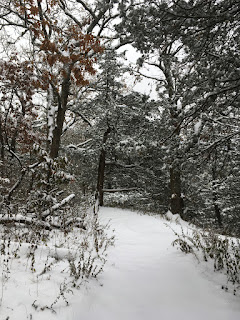 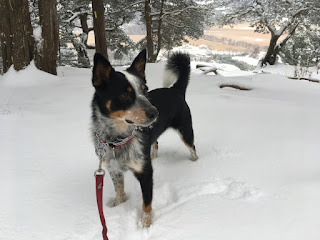 Later in the week, we celebrated Julia’s transition to half-time status at work.  On Thursday, we headed to Devil’s Lake State Park for a hike.  The ferry generally stays open into December, until the river and/or the boat becomes to icy.  The hydraulic ramps were icing up on this morning, causing delays. 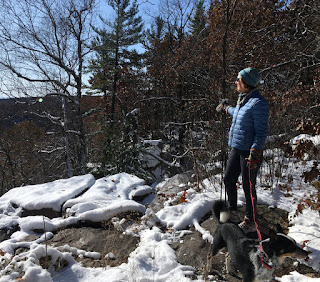 After the hike, we stopped in at the newly-opened Tumbled Rocks Brewery and Kitchen near the north entrance to the park.  The food and beer were both good.  We will return. 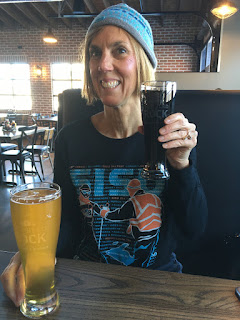 On Friday night, we received an unexpected call from the Campus Police Department at Justin’s college.  Almost exactly a year from the date that he broke his leg from a fall, he fell out of his wheelchair again.  Another ambulance ride, another hospital visit.  Thankfully, this time he didn’t break anything. He’s sore but still at school.