In the early morning, it's time to reload the wood stove.  Callie stayed far away from the stove when she first joined the family.  Now, I find myself dragging her hot body back when the stove starts pumping heat out into the room.

As soon as Julia leaves for work, Callie begs to go outside to play ball, no matter what the weather is.  After an hour or so of being inside again, she starts nagging me to go on our long walk/hike for the day.  Callie keeps me from being a lazy slug when the weather isn't the best.

Today, we had all kinds of weather during our hike at Gibraltar Rock.  We started off with light flurries, followed by rain, and then finished with sleet.  It was a typical gray November day. 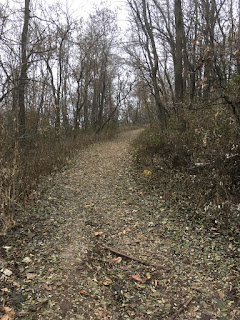 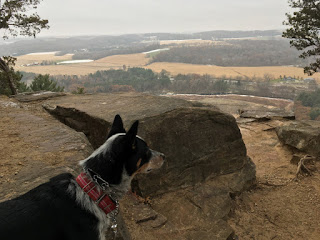 It's been awhile since I posted on the blog.  I've been busy moving posts from the wordpress blogging site to the blogger platform.  I anticipated that it would take longer, but I've now finished that process and am over here on blogger for the long haul.  If you are interested in receiving notifications to new blog posts, you are encouraged to sign up at the top of the page.

We had company over the weekend.  Dave and Ruth drove over from Milwaukee.  We spent some time at a new-to-us brewpub in Madison:  the Rockhound Brewing Company on South Park Street.  Good beer, good company  It doesn't get better than that. Later, we went to the Night Market near the state capitol. 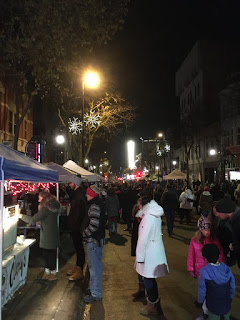 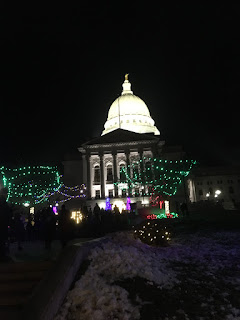 Earlier in the week, Julia and I went for a snowy hike at Lake Kegonsa State Park, followed by malted beverages and nachos at the Waypoint Public House. 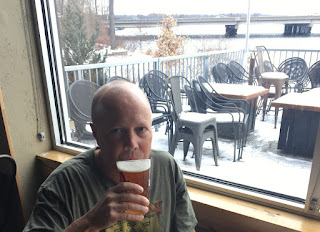 I also had a nice hike on the Fern Glen Segment of the Ice Age Trail.  It's about an hour in/out hike up and down hilly woods.  We added some length with a road walk at the south end.  There's also a side trail to Susie's Rock.  Lodi is known for Susie the Duck.  Susie is a fictitious duck on Main Street where ducks on the dole congregate for seed corn distributed by humans from a vending machine.

On the other hand, Susie's Rock is a quiet place in the woods where area resident Susan Groves like to sit back in the late 1800's.  I prefer the rock. 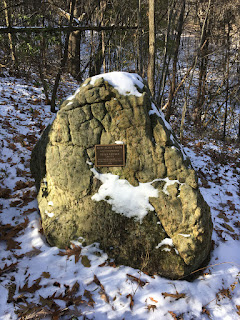 Opening Day for gun deer season starts this Saturday morning.  I'll be off the trails for ten days after that, limiting my exercise to city paths.  I also have a new project brewing that I will write about.  Thanks for reading.
Labels: Gibraltar Rock Lake Kegonsa State Park Lodi Night Market Rockpoint Brewing Waypoint Public House Wisconsin