When I wake up each morning, I hear the sound of gunshots.  No, I don't live in the the Inner City.  I live in rural Wisconsin, where 500,0000 deer hunters take over the woods during this time of year.

Only four people got shot on opening day this year, mostly shooting themselves in the foot.  The deer hunt season is actually much safer now than when I was a kid.  Fatalities are rare these days.  Of course, when I was a kid, I lived in a square mile inhabited by 18,000 people.  There wasn't much hunting going on there.

Where I live now, hunters are active on two sides of my own property.  Less than a mile from my house, vehicles line up to drop off deer carcasses for processing at Lodi Sausage Company.  Yesterday, I saw two huge bucks hanging off the back of someone's pickup truck on Main Street.

Julia comes from a family of hunters.  As a kid, eating steak usually meant one of her dad's venison steaks.  No one on my side of the family hunted.  I'm pretty sure my dad never fired a rifle after the Korean War.  Julia's dad never pushed me to hunt; however, he did try to get me to help out with butchering deer.  I like the taste of venison ok, but it isn't my favorite.  One time, he told me that if I didn't help out with butchering, I wasn't going to get any of the venison.  I told him that was fair.  No, I haven't missed it.

I've brewed coffee, tea, beer, wine, mead, and cyser.  When I owned the coffee roastery/shop, an employee told me that I should try kombucha, a fermented tea served cold.  That didn't sound good to me at all.  Sour cold tea?  What the heck?

As I've become older, however, my taste buds have evolved and my desire for alcoholic beverages has diminished to some extent.  Having a few beers before bed, and then having to get up in the middle of the night to visit the bathroom or to wake up with a slight headache isn't as much "fun" as it was in my younger days.  I'm not interested in giving up beer, but I'm focused on more quality and less quantity.

During the last year, I've had occasion to try kombucha a few different times.  It wasn't anything like I imagined. I would describe kombucha as tart, not sour.  Often, it's flavored with some of my favorite herbs and/or spices, such as ginger or mint.  Additionally, I find it to be a great thirst quencher.  Unlike beer, where one can turn to two or three, I find myself satisfied with a single kombucha.

There is a downside to buying it commercially.  Kombucha costs about the same as a beer at the coffee shop, and there isn't much of a discount when buying it at the grocery store (about $2.50 to $4.00 for a pint).  The expensive cost of imported beer was what drove me to make my own beer in the first place.  The ingredients for beer cost a fraction of the price of retail. 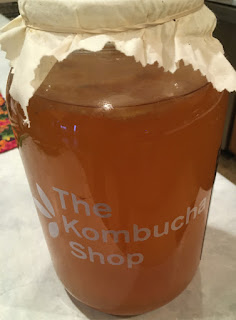 The same is even more true of kombucha, which is made with sweet tea.  With five teabags, a cup of sugar, and a magic hockey puck (more on that later), a gallon of kombucha can be made for less than a dollar.  There is some work and some passage of time involved, but it's even less involved than making beer. 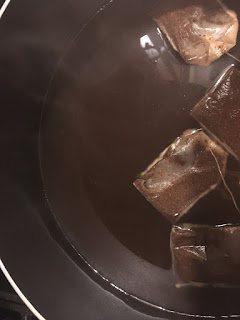 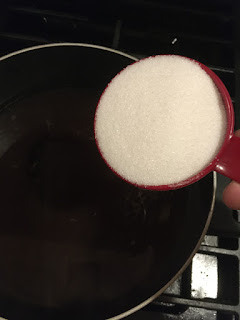 After the tea is brewed and the cup of sugar is added and stirred in (sweet tea), cold water is added to dilute the tea and to cool off the liquid below 86 degrees.  Now comes the magic hockey puck, known as the scoby. 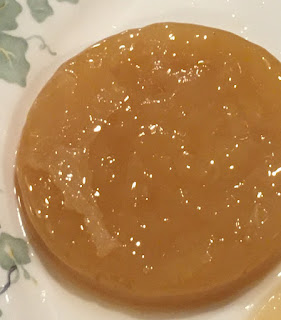 The scoby is a Symbiotic Culture Of Bacteria and Yeast, which eats the sugar in the sweet tea.  Over the course of a week, the result is a very low alcoholic and low calorie tart beverage.  The scoby in the photo above is the "mother" scoby that I purchased commercially.  A scoby can also be obtained over a longer period of time by adding unfiltered, commercial kombucha to the sweet tea.   My commercial scoby came as part of a kit that was actually put together at a place in Madison, Wisconsin.  They don't have a retail shop, so I bought it from them on Amazon.  That's the world we live in.

After a week of fermentation, the mother scoby gives birth to a baby scoby.  You can see the baby to the right in the first photo of this blog post.  Like most babies, this one is a little messy and smaller. The two scobys can go into the next batch or can be split up into two separate batches.  When one has two many scobys, they can be given away to a friend or stored in a refrigerated scoby house.  Or it can be tossed in the garbage.  Every batch of kombucha results in a new baby scoby.

At this point, the kombucha can be consumed without additional flavorings or carbonation.  However, most people bottle the kombucha with a small amount of sugar (to create carbonation) and flavorings.  Along with a half of teaspoon of sugar per pint bottle, I use hot water steeped in fresh ginger and then strained.  The filled bottles sit out at room temperature for a few days and then go into the refrigerator so they don't get too carbonated and explode.  You can buy fancy new bottles for this or reuse commercial kombucha bottles (which I do).

My total cost for seven pint bottles of kombucha per week is less than a dollar.  There are all kinds of health claims for kombucha.  The most common is that it promotes healthy gut bacteria (probiotics).  If there are any health benefits, that's a bonus for me because I drink it because I like it.

If anyone is interested in making their own kombucha, I recommend buying a kit.  The one I got from The Kombucha Shop is a good one, but I'm sure there are other good ones.  This isn't rocket science. No brewing experience necessary. There are also many youtube videos and websites providing useful directions.
Labels: Deer Hunting Kombucha