This is the time of year that hiking becomes problematic on Wisconsin’s public lands.  It used to be that Wisconsin’s deer season started the week before Thanksgiving and ended the weekend after Thanksgiving.  Now, with all of the special hunts to reduce deer populations and chronic wasting disease, the chances of running into a hunter in mid-October through Christmas have greatly increased. When hunters with loaded weapons appear on the trails, it’s time for me to take my walks elsewhere.

On Monday of this week, Callie and I hiked the Ice Age Trail segment from the Lodi Cannery to Twin Pines without any incident whatsoever.  It’s a beautiful time of year to hike: fall colors, comfortable temps, reduced mosquitoes, and fewer people on the trails, especially on weekdays.   We hiked Slack’s Hill on Tuesday and enjoyed similar conditions. On Wednesday, we went back to the Cannery segment.  Things had changed, and it wasn’t even deer hunters.

First, I should say that I don’t have any moral issues with hunters harvesting game within the rules.  I don’t hunt, but I’ve eaten game many times and helped to butcher farm  animals also.  Meat doesn’t come from a foam package covered with plastic wrap.  It comes from a living animal. Unfortunately, there are a lot of hunters that don’t play by the rules or are otherwise inconsiderate.

Additionally, some of the rules make hunting a little bit more like gathering.
It was obvious when we came out on top of the hill that state-raised pheasants were just  released.  A couple of birds came across the trail right in front of us.  There was no great surprise when we saw a bird hunter ahead of us.

Unfortunately, he was hunting right on the hiking trail with two unleashed dogs.  In Wisconsin, it’s illegal to hunt within 100 yards of the Ice Age Trail, but there’s little enforcement.  I suppose I could have made a citizen’s arrest or told him that he was breaking the law, but he had a loaded gun.  So there’s that.

The hunter’s back was to us.  He was trudging along with his gun without any idea that we were coming up behind him.  I stopped about 100 feet away (Callie on leash), and waited for him to notice us and leash his dogs.  My plan was to go around and past him, continuing our hike. As you might expect, his dogs were the ones to eventually notice us.  They both started running at Callie.  The hunter didn’t move but started swearing at the top of his lungs.  When one of the dogs got within 20 feet, I picked up Callie (who wanted to “kill, kill, kill”, despite the other dogs being twice her size).

I yelled, “Go home,” The dogs looked at me questioningly.  I yelled “Go home” again,  and they turned around.  When the dogs made their way back to the hunter, he made no effort to leash his dogs, but continued to walk slowly down the middle of the Ice Age Trail, gun on his shoulder.  I turned around and headed home.  It was time to leave that public property until after Christmas. Hiker-friendly laws aren’t much good when ignored by hunters. 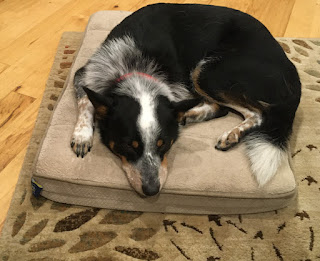 On Thursday, Julia took the morning off and we got up very early to take the ferry across the Wisconsin River. 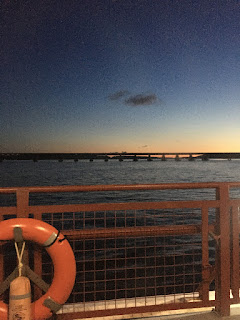 The sun was just starting to come up when we started up the east cliff trail. There was no one else on the trail, except for a lone photographer snapping photos of the sun hitting the west cliffs.  The lake was so beautiful.  We then hiked up and down the west cliff trail. 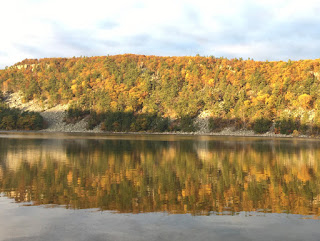 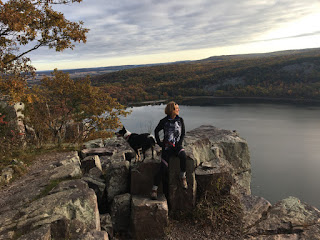 Between hikes, I’ve been making progress with the firewood pile.  I identified several fallen trees in my woods to cut up.  Because I live on a hill, the rounds get thrown down the hill, loaded into my truck and taken to the processing area.  Here, the wood is hand split with a maul and then stacked.
This year’s wood is stacked on pallets in my pole barn (5 full cords).  Next year’s wood is off to the left in the photo.  I need to get to work on the spaces on the right.  Split hardwood benefits from two or three years of aging in stacks to get the moisture levels down below 20%, which is optimal for wood stoves.  Typically, I heat with wood full time from October to April.  The furnace only goes on if we’re out of town overnight. 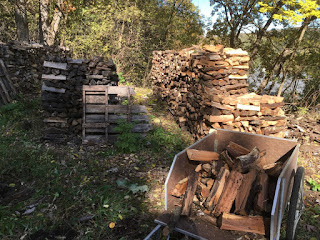