I played a lot of baseball when I was young.  I played just about every position, but mostly catcher.  It wasn’t my favorite sport, but it was probably the sport that I excelled at most in a team setting.  On one of my most memorable days, I stole second base easily–so easily that I decided to go into the base standing up instead of sliding.

For whatever reason, the catcher decided to throw late anyway, and the ball sailed high a bit.  The second baseman didn’t think the throw was coming either, so he was not in position to catch the ball.  Instead, my nose did, breaking in the process and gushing out huge amounts of blood.  As they loaded me up in the ambulance, I thought, “That was unexpected.”

This week, life threw another one of those curve balls.  My adult son Justin, who already has a full plate of medical diagnoses, including life-threatening Duchenne’s muscular dystrophy, was hospitalized for previously undiagnosed mental health issues. I thought that I already experienced all of the suckiness of hospitals, but the locked-down psychiatric ward presented a new level.

Everyone agreed that he needed to be there, but I just kept thinking, “what more could happen to this kid?”

We’re taking things day-by-day.  He is getting the medicine and therapy that the doctors think he needs. In hindsight, this was probably a long time coming and explains certain behaviors and perceptions.  We just weren’t prepared for it–kind of like that baseball to the nose.

In the meantime, Elvis the service dog isn’t allowed to stay with Justin at the hospital when I am not present, so I am playing UN peacekeeper at home between the docile Elvis and the aggressive, jealous Callie.  For hospital visits, Elvis comes with me, while Callie stews at home in her crate.  Julia’s father-in-law Gene, who had a stroke just before Christmas, has been home and back to the hospital by ambulance several times.  He is convalescing at an area nursing home with the hope to transition eventually to home, but even he agrees that their current house needs to be sold in favor of more accessible living.  Gene has good days and bad days.

I am still hoping for a trip south in the Brew Hut in early April, but there are a lot of balls up in the air right now. 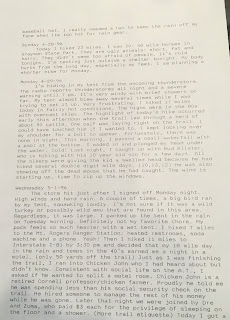