We don’t live in an area known for floods.  I’ve lived here for over twenty years, and there have been a couple of times for minor flooding where the creek overflows.  I guess there’s a reason that FEMA talks about a 100-year floodplain.  Spring Creek runs through downtown Lodi.  With a substantial snow base and temperatures quickly rising into the 50’s, that little trout stream jumped its banks and caused big problems for people. 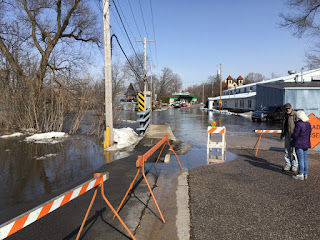 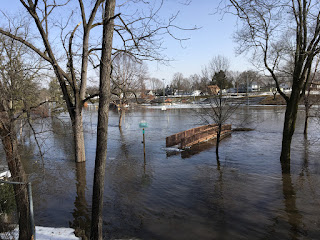 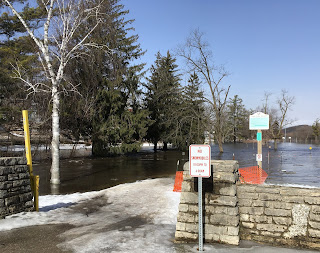 Streets were closed; power was lost; and houses were damaged.  We live halfway up a big hill, so if our house ever floods, we’ll need an ark to escape.  My friend Dean has a property that he believes was erroneously placed in the flood plain (along with the high insurance premiums).  His place also stayed high and dry.  When the power went out, he was off to buy a generator to keep the sump pumps going.  The pumps started back up again, and he was good, although his neighbor with lower elevation had water pouring into that building.  With most of the snow gone, the temperatures dropped over the next couple of days, and the waters receded.

On Friday, we had date night in Madison.  First, we stopped at Working Draft Beer Company. 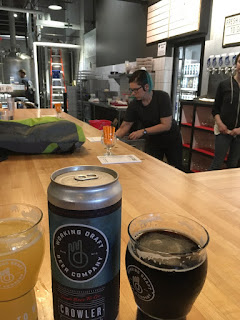 Julia had the hazy IPA, while I sipped a Black IPA.  We then went down the street to Poke Poke. Poke is a style of food that has finally come to the Upper Midwest.  Tasty, but on the expensive side when ordering at the counter and served in a cardboard bowl.  We were home early in time for an evening fire. 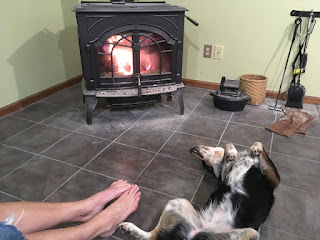 On Saturday morning, we headed over to Sauk City and visited Julia’s Dad.  His sense of humor is definitely back.  He said the fish at the nursing home was so tough that he couldn’t cut it with a knife, and that a couple of his acquaintances at the nursing home got “sprung” last week.  No date on his return home, but it’s more important that Julia’s dad gets the physical therapy that he needs and rebuilds his strength post-stroke. 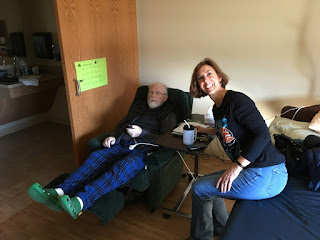 We will be going to Whitewater to bring my son Justin home tomorrow for his Spring Break.  My daughter Allie is off traveling in Mexico on her spring break, so I’ll be back in charge of Justin’s care-giving while he’s home. We should have a better idea of how he’s doing and what his plans are before he is due back at school at the end of March.

For many reasons, this has been a long winter.  I’m looking forward to spring. 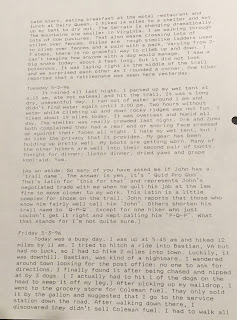