Lamentation and a Short Trip

My extended fall trip has officially been cancelled.

There was a last-ditch effort to place Justin in a small group home just outside of Whitewater, which would have been great for Justin's complex physical needs and convenient for attending college also. He interviewed with the owners and felt that he really  made a connection.  Justin was told by Care Wisconsin that he was their leading choice among three candidates for the group home.

That fell through due to "contractual issues."  Somehow, we went from being number one on the waiting list for Care Wisconsin and the group home's top choice for placement to "it's out of our hands."  We asked for transparency regarding the contractual negotiations, and they wouldn't even give us the name of the group home.  "That's done now."

As a result, Justin is staying home.  He misses his best friend who lives on Justin's dorm floor. 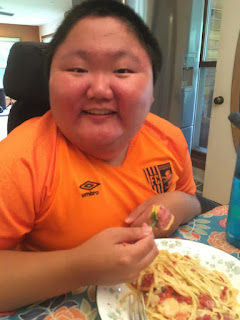 When things broke down, Care Wisconsin threatened to put Justin in a nursing home if Julia and I didn't cover the hours.   Now that's an interesting way to manage Medicaid dollars.

Yesterday, we started the process to move Justin out of the managed care system to IRIS, which is self-directed care.  Justin will be given a budget for his care needs and hire caregivers from the money budgeted. As we understand it, with the MCO cut out of the process, there will be more transparency and better wages available to caregivers.     Justin will have an IRIS fiscal consultant and us available as resources, but he will be responsible for hiring, training, and managing his employees.

The transition takes awhile, so Justin will probably be stuck with his parents as his employees for this semester.  Let's hope that neither of us gets sick or blows out our backs. We were told by Care Wisconsin that it would take 8-10 caregivers to cover Justin's needs in the dorms.  At home, it's the two of us without any other back-up.

The good news is that we won't have to worry about Justin laying helpless in bed when caregivers don't show up in the morning or sleeping all night in his wheelchair when a caregiver doesn't show up to transfer him to bed at night.  We live here so it's hard not to show up.  In order to stay sane, I'll continue trying to take short trips each week with the Scamp until the snow flies or hunting season, whichever comes first.

Last week, I drove an hour west to Gov. Dodge State Park and camped in the rain.  It was wet, muddy, and dark, but the Lost Canyon Trail was still beautiful. I didn't have to worry about social distancing; there simply wasn't anyone else around.

I like cooking in the Scamp on cooler, rainy days.  Here, I cooked mushrooms and slices of onion to serve with a pepperjack cheeseburger.  On the side, I have spinach sauteed with garlic and olive oil. To keep this post on blog topic, the Yeti is filled with home-brewed kombucha. 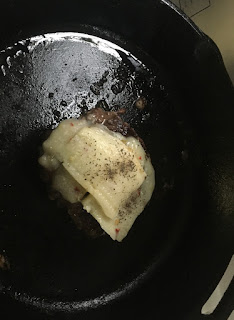 Rain?  Callie doesn't care.  More trails, she says. And maybe some of that burger. 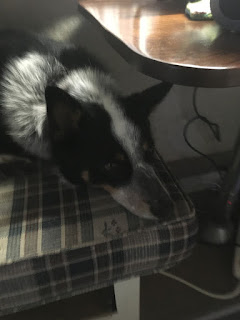