I was never a big fan of the music by the Canadian rock band Rush, but I did appreciate some of the song lyrics by drummer Neil Peart (who died earlier this year).  One song, titled "Circumstances," contained the following refrain:
"All the same, we take our chances
Laughed at by time
Tricked by circumstances
Plus ca change
Plus c'est la meme chose
The more that things change
The more they stay the same"
That's one way to look at the world.  I've spent the last couple of weeks coming to terms with my circumstances.  It looks like the earliest that Justin will return to the dorms is in mid-January.  For the foreseeable future, I'll be working forty hours per week as his caregiver.  At first, I was really ticked off, but I'm coming around to making the best of the situation.
Our home is probably the safest place for Justin to be.  Covid is ramping up significantly in Wisconsin and its college campuses in particular.   I'm improving my caregiving techniques, making it easier for the both of us.  When my kids were babies, I used to make a game out of how fast I could change a diaper.  Yeah, I'm a bit over-competitive.
Justin and I have been enjoying watching some sports together.  Of course, it helps that the Packers won their first two games with lots of scoring.
Last week, I just didn't feel like driving anywhere after my four days of ten hour shifts. Instead, on my off days, I hung out in my man-cave Scamp on our own property.   On work days, I took long walks out in the country.
The weather has changed.  The hummingbirds are draining our feeders, building fat for their coming migration.  Bee farmers are collecting honey, and downsizing the bees' homes.  Readers might remember earlier this summer when the boxes were stacked six or higher.  Not anymore. 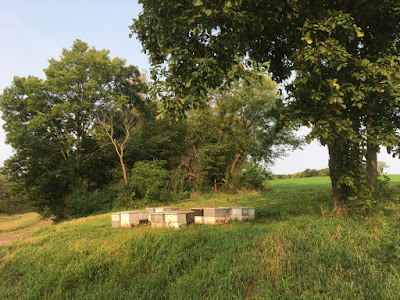 Late last week, I made my last trip of the year to the grain share farm where I get my flour.  On the way home, Callie and I hiked the Pleasure Valley Trail at Blue Mounds State Park.  The trail is a mix of woodlands and restored prairie.  The leaves are beginning to turn. The prairie flowers are mature.  This is a Callie-approved trail. 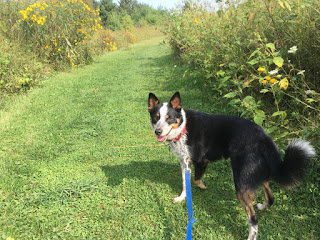 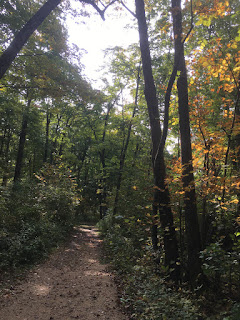 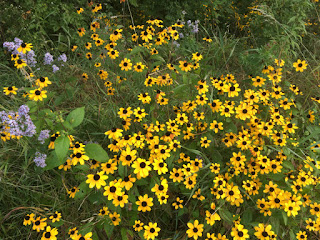 On another day, Callie and I returned to Rowan Creek Fishery Area, which we haven't hiked since winter.  We've had some problems with off-leash dogs here, but no humans or canines were seen this time.
Much of the trail follows one of Wisconsin's top trout streams. 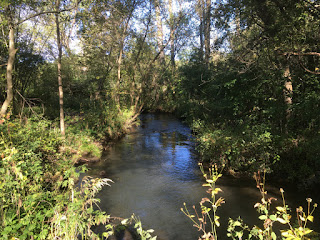 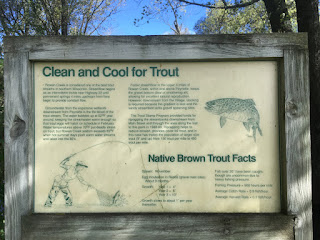 This week's weather forecasts warm days and cool nights.  I better take advantage of that by going somewhere with the Scamp.  Winter is coming.