The Bars Are Open

I spent some time this past week getting the Scamp ready for camping.  Temperatures in the twenties seem to be done for the year.  For me, that meant installing a new water pump, running some fresh water through the plumbing system, and clearing a clog in the kitchen sink.

While my head was underneath the rear seat bench and the kitchen cupboards, most of the Wisconsin Supreme Court had their heads up somewhere else.  The conservative majority voted 4-3 to invalidate Wisconsin's safer-at-home order.  There is no back-up order. The Republican Legislature wanted a work week's delay to negotiate a new order with the Democratic Governor, but the conservatives on the court said, nope.

Did I mention that one of those justices was voted out of office this spring?  His replacement isn't scheduled to start yet, so his vote was the deciding one. The newly elected justice isn't allowed to vote yet. Not all of the conservatives went along with the right wing judicial activism.  Justice Brian Hagedorn refused to vote along with his fellow conservatives, writing a scathing dissent:


"The rule of law, and therefore the true liberty of the people, is threatened no less by a tyrannical judiciary than by a tyrannical executive or legislature,” Hagedorn wrote. “Today’s decision may or may not be good policy, but it is not grounded in the law.”

Immediately after the majority's decision was announced, bars started opening in Wisconsin--many of them abandoning social distancing.  It is true that Julia's optometry school friends accused her of being in the photos of crowded bars that went viral from Wisconsin. It is not true that we will be in the bars anytime soon.

Also, as soon as the order was set aside, Annie's Campground near Gresham, Wisconsin posted that things were back to "real normal."  Annie took the further step to ban masks in campground buildings.

"Here's the line up for May 15-17: Beautiful Weather!!!!! Masks are NOT allowed in the buildings for safety sake. They are viewed as a robbery in progress and will be handled that way.

Friday night fish fry, fisherman's platter, shrimp, homemade pizza, pub mix, specialty drinks at bar $3 (Sanitizer and Summer's Not a Bummer Hummers), and more appetizers.
Saturday: 0900-noon is @Starla's Concealed Carry class at the pavilion, no equipment needed... she is a fantastic instructor..."
There are very few virus cases in the Gresham area--yet.  Wisconsin's petri dish experiment will undoubtedly now include people from hot spots in Chicago and Milwaukee joining in with like-minded people in northern Wisconsin.  You have to be careful what you wish for.

Some of Wisconsin's larger urban areas immediately implemented their own stay-at-home orders.  Madison's order doesn't expire until July.  Here in Columbia County, no order is in effect.  Some people are complaining that many businesses are not immediately re-opening, but apparently not everyone thinks that things are back to the real normal yet.  Cases are back on the increase, even in Columbia County, due in part to increased availability in testing.
We continue our boring lives here, scanning the interwebs for chances to get away in the Scamp.  National forests, state parks, and the Kickapoo Reserve remain closed.  There are a few municipal and county parks opening up campgrounds, but they aren't an upgrade from my spot on the top of the hill at home.
The view outside the Scamp windows shows that my fruit trees are blooming.

For my outings, I took a road trip about an hour away to pick up my monthly fresh milled flour and some eggs.  We played around with the idea of joining a CSA (community supported agriculture) share for weekly fresh vegetables this summer, but decided that the cost was more than we wanted to pay.  We'll have a small vegetable garden instead.  After having trouble accessing flour for my weekly sourdough bread, I did come across a CSA for fresh milled flour from organic heirloom grains.  The monthly cost wasn't too bad, and it gives me a chance to take a drive once per month to a different part of Wisconsin. 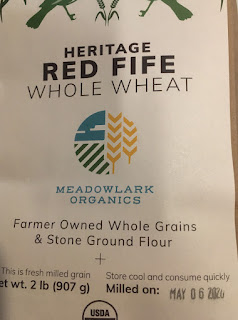 On the way back, I stopped near Prairie du Sac for eggs from pasture chickens.  The lady had some duck eggs for me to try as well.  They were surprising good, so I'll be getting more of those next time.  The price was the same as chicken eggs ($3/dozen), but the yolks are much bigger and richer.

Justin celebrated his 20th birthday this week.  We had a small party in the driveway with strawberry shortcake.  Julia's dad and stepmom were also in attendance. 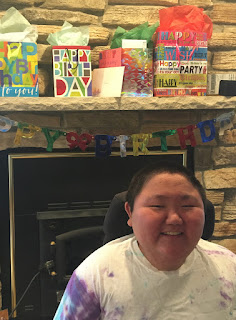 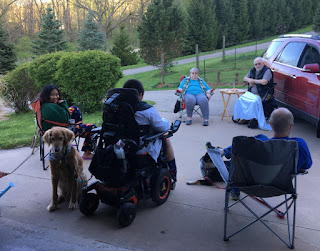 Julia goes back to work one day per week, starting Monday.  The plan is to go to two days per week in June.  I had a bad virus nightmare this week. Hopefully,  nothing similar happens during waking hours.