Yeah, I got sick around Easter.  In different times, it would be no big deal. I don't get sick very often, but it happens. Fever, chills, aches and pains, headache, sore throat, upset stomach and runny nose.  Blech.

Unfortunately, many of these symptoms are associated with the conrona virus.  I was mildly concerned, but I never thought that I had corona virus.  This felt too much like other bugs that I've caught.  If testing was widely available, I could run down to the doctor's office and find out.  However, there's still a shortage of tests.  Public health guidelines are to stay home and self-isolate unless your situation is really bad (difficulty breathing).

The good news is that I haven't had any breathing issues, and my fever went away after a couple of days.  I stayed on Tylenol for most of the week, so I wasn't positive if the fever went away on its own or if it was the Tylenol.  Now I need 3 days of no fever (without Tylenol) , seven days since onset of symptoms, and a decline in symptoms.  If the fever doesn't return, I should be good to go on Sunday.

To protect Justin and the rest of the family, I moved up to the Scamp.  My little electric heater has kept it mostly comfortable during some cold temperatures.  Callie the crazy dog has been good company and has kept her eye on me day and night to make sure that I stay isolated. 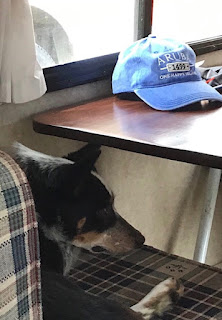 During my staycation, I read "Call of the Wild," binged on downloaded episodes of Bosch and the Wire, and slept a lot.  Those tv shows are really good, but "Call of the Wild" is timeless.  It's available for free at the internet archive. It's especially recommended for anyone with a dog like Callie.

I returned to my long walks on country roads on Wednesday.  I rarely see anybody.  This is a stream in the marsh near my house. When I first looked at it, I saw two decent-sized trout. My friend Jon (now deceased) told me there were trout in this stream, but I never saw proof until this week. 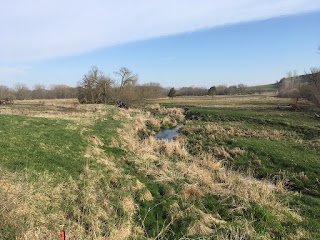 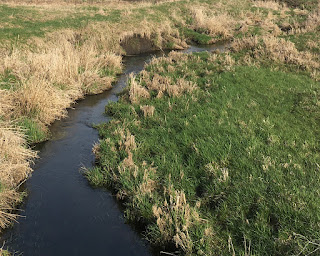 I'll probably start splitting wood again this weekend.  On a hill like we have, leaning trees sometimes pull up by their roots and fall.  That happened this week to an oak. 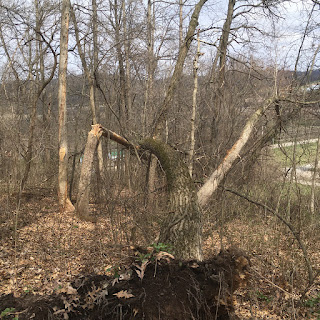 The domino effect changed five other trees.  The tangle is probably too dangerous to mess with at this point, but gravity will eventually bring them all down to create more potential firewood.  My chainsaw can be very patient.  There are less dangerous downed trees in my woods to process. 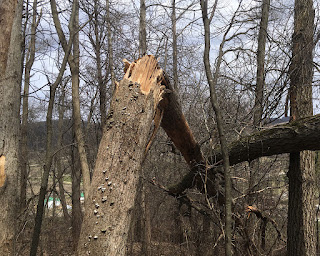 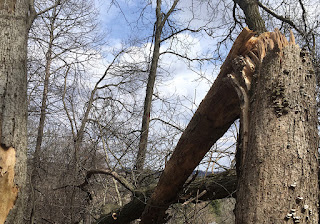 Nature has many lessons for us. When a tree falls in the forest, it doesn’t really matter if anyone hears it.  But there is often collateral damage.
Labels: corona virus Family Wisconsin