My favorite local places to hike are:  Gibraltar Rock (less than ten miles away) and Devil's Lake (less than thirty miles away by way of the Merrimac Ferry).

Yesterday, Governor Evers closed those two locations, along with dozens of other state parks and state natural areas in southern Wisconsin.  This was not unexpected.  State public lands have been flooded with people seeking outdoor opportunities but who were not practicing social distancing.  In fact, the record crowds of people, together with closed bathrooms, limited garbage service and no added staffing, resulted in increased vandalism and litter.

I've been staying away because it was all too predictable, given human nature.  The Lodi Marsh remains open, as far as I know.  We've been hiking there about once per week early on weekday mornings to avoid crowds.

Unfortunately, Callie has had a couple of hostile encounters with other dogs there.  One was an off-leash pit bull that the owner had no control over, even after we walked fifty feet off the trail to avoid it.  Another was an on-leash bigger dog that its owner wasn't able to control.  The dog literally dragged her owner 30 yards to get into Callie's face.  Callie's behavior has improved dramatically since she joined our family, but she doesn't tolerate other dogs in her face.

Australian cattle dogs are part Australian dingo, and she seems to have received more than her fair share of that part.  Sometimes, I think Callie must be swearing at the other dogs in dog language.  She definitely brings out the worst in other dogs.  The only dog that she tolerates is Elvis the service dog.  Callie seems to think that Elvis is a docile cow tied to Justin's power wheelchair.


The best place to walk has turned out to be on the country roads east of my house.   The old dairy farm roads are almost always empty of traffic and people. 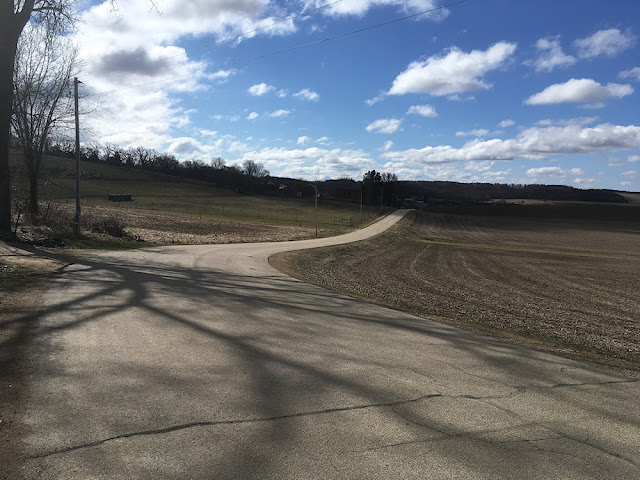 After a five mile walk in the morning, we work on the firewood project in the afternoon.  This involves cutting down dead trees, bucking the downed trees into rounds, and rolling the rounds down the hill (we call it firewood bowling).

Then we pile the rounds into the splitting pile, split the rounds into firewood, and stack the firewood  on pallets.  Each year, we move seasoned firewood (1-3 years old, dependent on species) from the outside storage area into the pole shed for the coming winter. 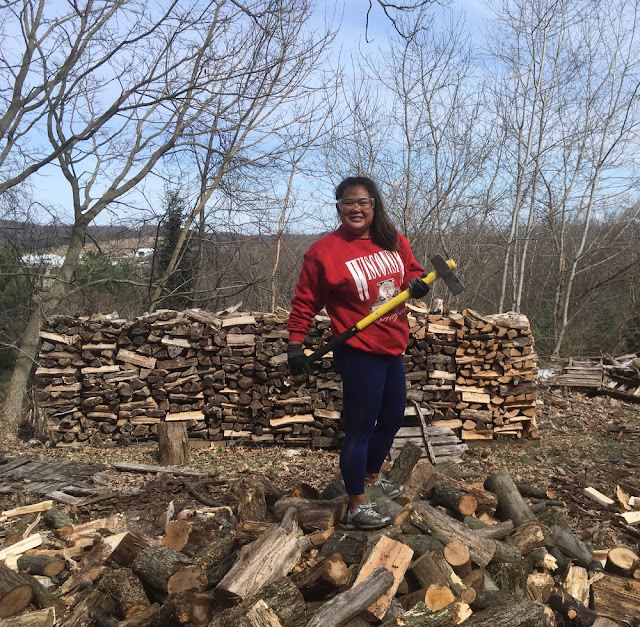 There's still plenty of work to do outside while social distancing. With temperatures in the 20's and 30's for the next 7 days, we will still be burning last winter's firewood to keep the house toasty.