The day's weather started off like my mood:  dark, windy, rainy and cold.  The plan was to drive to Madison and walk around Monona Bay, but it was still miserable out when we reached the eastern outskirts of the city.

We decided to put off the walk until later in the morning.  Julia shopped for special yarn (she is learning to crochet), while Callie and I circled around the outside of the mall.  I then did important stuff like buying a toilet brush for the Scamp.

Yes, the Scamp.  My plan is to head west around April 1st, give or take a few days, depending upon the weather. Moving the starting day around isn't much of a big deal.  However, the spread of the coronavirus in the United States is a curve ball that I didn't see coming.

Of course, it's still early to make any decisions, but I'm concerned about closed businesses, restricted travel, and out-of-network medical expenses.  It may not be the best time for a long trip.  But I am preparing anyway as though I'm going.

My good friend Dean installed new front brakes on my Nissan, which was good timing because the brake pads were completely gone.  Going up and down mountains without good brakes would have been a bad thing.  New tires for the truck may also happen.  I am so hoping that there is a trip.

Getting back to today.  Just when we decided to head home, the sun showed up.  We turned around and headed to Monona Bay.  Lots of fishermen were out. 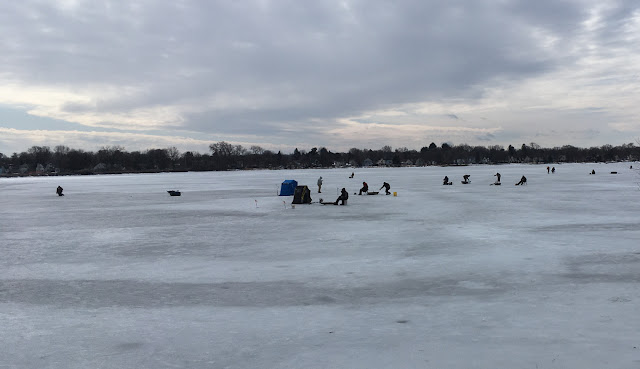 Yes, there were still some clouds, but look in the other direction.

That is the Frank Lloyd Wright-inspired Monona Terrace and Convention Center in the lower right center of the above photo (white building).  I love how it blends into the lake and landscape.  During the summer, there are concerts on the rooftop.

Walking around the Monona Bay is a four mile loop.

Then we were ready for lunch.  The original plan was to enjoy some pho at one of Madison's new Vietnamese restaurants.  It has a very naughty-sounding name, but the owner (who doesn't speak much English) claims total surprise. 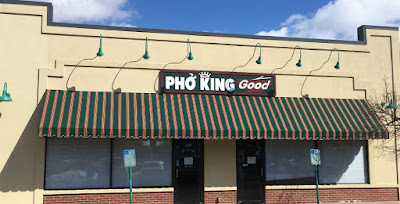 Unfortunately, they were closed. 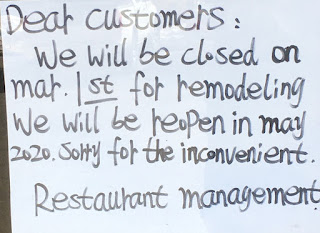 So we headed to a restaurant that we know on the other side of the strip mall:  Badung.  They have excellent food and didn't have any remodeling issues.

Julia and I both ordered Khao Soi, which is a Northern Thailand curry egg  noodle soup with beef, cabbage, lemongrass and star anise.  It was delicious.  With egg rolls, our bill totaled $20, including a generous tip. 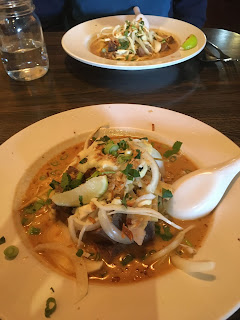 When we came out of the restaurant, dark clouds returned.  However, with our bellies full and our exercise complete, we felt much better about the rest of the day.