Last week, I ran away from home to the forest--specifically, the Chippewa Recreation Area located within the Nicolet-Chequamegon National Forest.

My first night was not perfect.  Allie was having a slumber party on our property with two of her closest friends, so I got the heck out of town on a Saturday night without any reservations.  I called the Walmart in Medford, Wisconsin and was told that I could overnight park.

However, once I arrived, I was told that I couldn't park in the customers' lot.  Instead, I should park in the back where the trucks unload.  There was a sign with good news and bad news.  It said that trucks were not permitted to unload from 10 pm to 7 am.    It also said there was no overnight parking by order of the Medford Police Department.  I went to the front desk again and was told that no one pays any attention to that sign.

That advice was on the money.  I slept undisturbed until 4 a.m. when the first truck blasted through right next to my window while making a 180 turn before backing loudly into the loading dock.  After the first truck, more trucks rapidly arrived and carried out the same tight turn.

I was out of there at first light and on my way further north. About 30 minutes before I arrived at my destination, deer started crossing the road just in front of me.  After that happened, I was on high-alert for what took place next.  A large black bear crossed the road just ahead of me.  There was no danger of a collision, but I got a very close look at the bear and a chance to observe how fast a bear's burst is.  No one is going to outrun a black bear with that kind of burst.  Fortunately, they are almost always running away from humans, not towards them.

On my way into the campground, I passed a large pop-up camper, and I wondered if they had vacated a good campsite.  No worries.  Even early on Sunday morning, there were ample campsites, and I chose the best, least expensive one.  Premium sites on the lake are $18; standards sites are $15.  Visually, my site was also on the lake, but there was a small common day use area directly behind my site, so it was classified at the lower rate (site S18).

No electricity or sun for solar, but they do have hot showers for a buck, flush toilets,  water, garbage and a dump station. 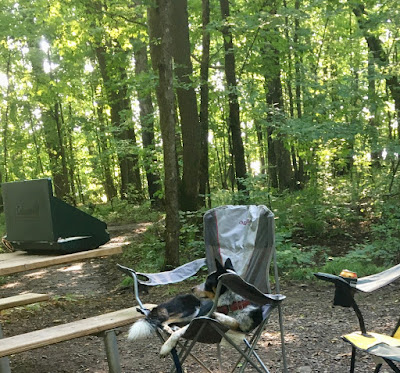 At sunset, the loons and sandhill cranes bragged in song about how wonderful it is to be in nature. 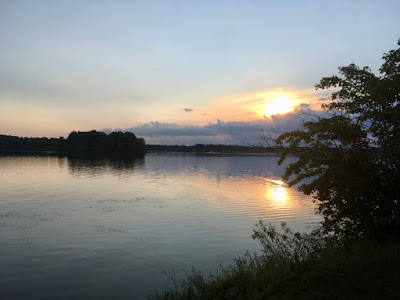 I spent 6 nights here.  I'll break down the trip into another post or two to include a couple of the side trips that I made using this campsite as a base. The only thing I didn't have was decent internet service.