This week was a spectacular week for travel.  First, we traveled to Whitewater, Wisconsin to move Justin out of his dorm room.  We were supposed to have done that back in mid-March, but we received an exception because Justin is high-risk.  Mixing him in with a bunch of college students, recently returned from spring break, and their families, as everyone rushes to move home, wouldn't have been a good idea.

So we were able to move out with no one else around this week.  It's not like they needed the dorm room.  The place was deader than a graveyard. Justin is taking an online class this summer.  We have no idea if the dorms or the school will open in the fall.  Refunds for the food service plan and dorm rental have been slow.  The university is in tough financial shape.

Yesterday, Allie and I drove to Milwaukee to start moving stuff out of her apartment.  Allie's lease is up at the end of July, but she didn't bring home enough underwear and socks to make it until then.  As it turns out, we brought home a little more than I was expecting:  six big tote boxes, a large suitcase and assorted other containers.  Poor Callie barely had room in the bench seat of the truck to crouch on the way home.

Early in the week, we had some cold nights, but we still spent some time outdoors.  The DNR is reluctantly allowing small warming or cooking fires with a prohibition against all other burns. A small warming fire was just enough to take the edge off, along with S'mores.


Today's excitement was a grocery run for curb-side pickup at a large Sun Prairie supermarket, Woodman's.  We were running out of some hard-to-find items that aren't available locally, including the frozen fruit mix that I use for our morning smoothies and my Kombucha.

Yes, I'm still making fermented tea on a weekly basis.  I gave up on the ginger flavoring, which required making a ginger syrup from diced ginger and sugar.  Our local store was out of ginger for weeks, so I started substituting a few frozen berries from the berry mix.  The process is a lot easier and provides the Kombucha with a lovely flavor and color. 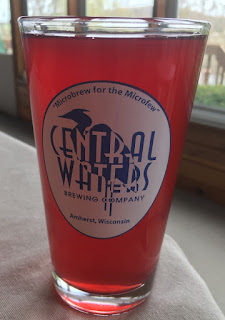