As the photo above shows, we hiked this week to Rowan Creek Fishery Area.  Located near Poynette, Wisconsin, this state-owned property isn't very far from our house, but we rarely hike here because it's heavily utilized by hunters and has less defined trails. 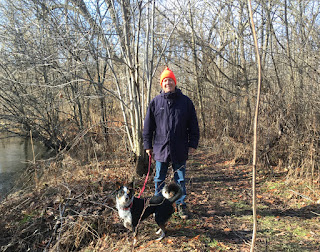 Things started out well with a nice wide trail. Another reason that we don't hike here is that it's usually wet and muddy.  Fortunately, the trail was mostly frozen this day. 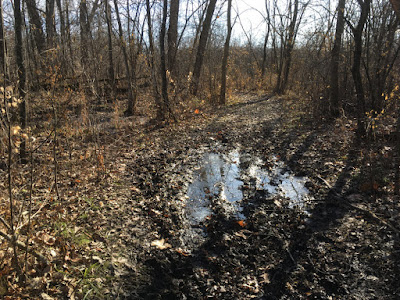 Eventually, the trail narrowed until we were clearly following a deer trail.  And then it ended in a thicket between two tributaries of the creek.

It seems that our months of November and December have flipped.  We had lots of snow in November, yet the first half of December has been gray with scant amounts of snow, sprinkled with freezing rain. Nights have been cold, however, and the snow-making equipment in Wisconsin's mountainous regions has been busy. 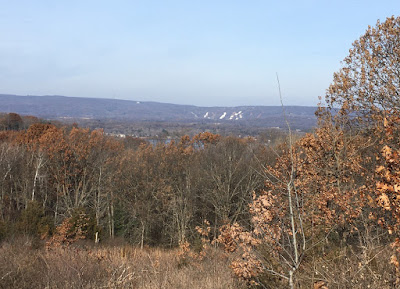 What?  You say that Wisconsin doesn't have mountains?  In the center of the photo above, you can make out the ski runs at the ominous-sounding Devil's Head resort.  This is the Baraboo range, a buried mountainous area 25 miles long by 5 miles wide containing rocks that are 1.5 billion years old.  Highly eroded over the years, the Baraboo range reaches current elevations slightly over 1000 feet.

The big development for the week is that Julia and I have decided where we will take our winter trip.  We're committed because we bought airline tickets, but we don't have any place to stay yet.  It's always a little unnerving for a frugal guy like me to attach money to travel plans without knowing for sure that my son will have care-giving and will be in good standing to continue school.  Justin is often confident that things will be all right, but that confidence isn't always well-placed.


As an example, this week, Justin texted us this photo: 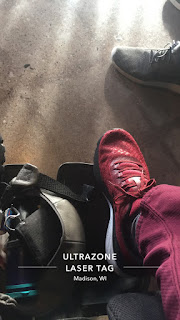 Several of his buddies picked Justin up out of his wheelchair and put him into the seat of a large SUV.  Then, they picked up Justin's 400 lb power wheelchair and tipped it over onto its side so it would fit in the back of the large SUV to take him to Madison.  This is not in the wheelchair manual for recommended transport.


Fortunately, Justin had fun, and the wheelchair made it both ways without apparent damage.  If I had any hair left, things like this would turn my hair white.  He could have asked us to transport him back and forth, which we could have done with some planning, but Justin is the spontaneous sort. I guess that I was too when I was 20, but I wasn't texting photos of my risky choices to my parents.

Assuming Justin is heading back to school next January, we will be adding a new continent to our list of travels.  I had to look it up to be sure, but that's enough of a teaser for now.